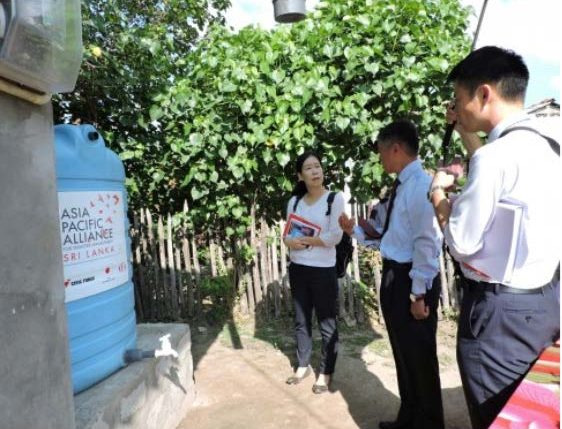 21 MARCH 2022,TONGA –A-PAD Sri Lanka team visited the island of Kayts located in the Administrative District of Jaffna and engaged in a monitoring of rainwater harvesting systems, which were installed in 2016. The initiation of this project was carried out in partnership with private sector partners, A-PAD Japan and Civic Force of Japan.

Six years later in 2022, the A-PAD team visited several houses where the rainwater harvesting systems were installed and found that all the systems were still in good working condition. The prolonged aridity of the peninsula results in the lack of water availability, access to it and most importantly, the possibility of storing water when provided. However, although the systems were installed in selected houses, its usage was being shared amongst the community, which was a heartening fact. After speaking to the beneficiaries themselves, it was understood that the tanks provided for harvesting had proven to be very effective.

Thus, considering the difficulty in acquiring water by other means, the beneficiaries were sincerely thankful to A-PAD for installing the rainwater harvesting systems, which they have now customized to store water in all capacities.

We, as A-PAD are glad to hear the positive outcomes of the rainwater harvesting initiative and to all partners who joined hands with us in reaching out to the communities, while empowering them to be resilient champions even during challenging times. (source: A-PAD Sri Lanka)